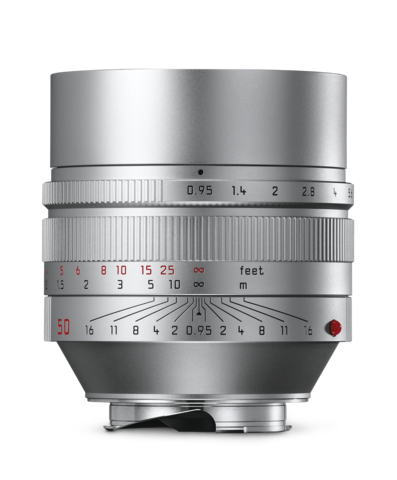 Since it first appeared on the market in 1966, the Leica Noctilux-M has always been considered a masterpiece of optical engineering that brings photographers enormous creative freedom. It is the world’s fastest aspherical lens for 35 mm photography and, when shooting in low light, reveals fine details that are hardly perceptible to the naked eye.

Pictures made with a Noctilux-M are characterised by the unmistakable bokeh of the lens and a visual quality that verges on impressionism. It is a fascinating tool with which photographers from every corner of the world master visual and artistic challenges. The lens has been used by them to bring us fascinating stories from the darker and lighter sides of life. The character of images captured with the Noctilux remains unrivalled until today.

The Noctilux-M is characterised by its unique rendition of contrasts – this results in pictures of outstanding brilliance, sharpness and minimal flare and coma effects when shooting at maximum aperture. A street lamp at night, the tail lights of a vehicle, the face of a child in candlelight, or an actor or singer spotlighted on stage, appear with authentic and natural clarity in every picture. Subtle nuances of colour and finest textures become visible. These images radiate a certain delicacy and sensuality.

What’s more, a Noctilux-M enables creative composition with the aperture, the plastic, seemingly three-dimensional, isolation of the subject that lets it float against a creamily dissolved background. No other lens can achieve such perfect bokeh. An aspect that for many photographers is much more important than working with Noctilux-M ‘only’ in failing or hardly perceptible available light.

1966: the first Noctilux lens is presented at photokina.

The Noctilux astounded visitors to the fair and the industry press with its virtually revolutionary optical properties. For those days, it offered a simply gigantic maximum aperture, but not only that, it was also a maximum aperture that delivered exceptional optical performance.

Also remarkable was the fact that it was the first ever lens produced in series to feature two aspherical lens surfaces. One of these two asphericals was made from special glass with a high refractive index. The task of the asphericals was to reduce spherical aberration at maximum aperture and increase quality in the image field.

At that time, the production of asphericals was a particularly complex and costly process. Even the most innovative new lens grinding machines were no alternative to the experienced precision optical engineers who gave each element its final polish completely by hand. Even so, such specialists were unable to further minimise larger tolerances in the final stage of their production. Often enough, an element had to go through every stage of the grinding process all over again. An extremely costly method that was in urgent need of improvement.

At the same time, new testing methods also had to be developed to assure the technically almost Utopian precision demanded for the aspherical surfaces of the required elements.

1976: The next generation to appear on the market featured special glass types with a high refractive index.

The lens designers at Leitz had worked at fever pitch to achieve the ultimate high-performance lens with ideal maximum aperture of f/1. One of their aims was to use only spherical lens elements in its construction to avoid the almost prohibitive costs of producing asphericals.

Both aims were successfully realised in the new Noctilux-M 50 mm f/1. The glasses used in the construction of this lens had an exceptionally high refractive index that contributed both to its impressive imaging performance and the extremely natural look of pictures captured with the lens. The Noctilux was able to be used wide open where competing lenses were forced to stop down. Equally impressive was its freedom from stray light effects– in contrast to other lenses that showed unnatural reflections, exposures made with the Noctilux were natural and completely free of flare.

As a lens for available-light photography, the Noctilux fulfilled even the most demanding expectations, although in other areas some small compromises had had to be made. But anyone who saw how it penetrated the shadows, how free of flare and coma it was, the plasticity with which it resolved even the finest details, and how clear and delicately nuanced colours appeared, came to the inevitable conclusion: the Noctilux 50 mm f/1 was the one and only choice among high-speed lenses.

2008: The Noctilux lens is revolutionised again.

More than 30 years later, at photokina 2008, Leica presented the new highlight of the Noctilux family: the Leica Noctilux-M 50 mm f/0.95 ASPH. It redefined the limits of the physical possible and catapulted the potentials experimentation with planes of focus into an entirely new dimension.

To achieve this, the latest technological advances were combined with the many years of experience gathered in the design and construction of both of its predecessors. In consequence, the new Noctilux owes its exceptional imaging performance to a combination of specially formulated glass types with anomalous partial dispersion, glasses with high refractive indices, a floating element and two ground and polished asphericals. The latter are manufactured lens-by-lens in consistently perfect quality. Although the production of asphericals remains an extremely elaborate process, it is today much more efficient and, in turn, more practicable than it was in the days of the first-generation Noctilux from 1966.

Photographers can once again rely completely on the promise made by the first and all following Noctilux lenses: the maximum aperture is simultaneously a working aperture. On other words, there is no need whatsoever to stop down to achieve better imaging performance. The extremely shallow depth of focus when shooting wide open is a feature of the lens that can be consciously used as a creative tool.

The enduring value of cross-system compatibility

The Noctilux – usable on M and SL cameras.

Although primarily conceived for use on M-Cameras, an appropriate adapter also allows the use of Noctilux lenses with SL-Cameras and preserves all their original functions. In this way, photographers can experience the delight of having even more opportunities for using one of the world’s best lenses. The 6-bit coding of the adapter preserves all functions, such as exposure metering, automatic aperture priority exposure, and manual setting.

‘In combination with its incomparable rendering of colours, rich contrast rendition and resolution of details, the shallow depth of focus made possible by its outstanding speed enables photographers to create images with a uniquely fascinating aesthetic.’